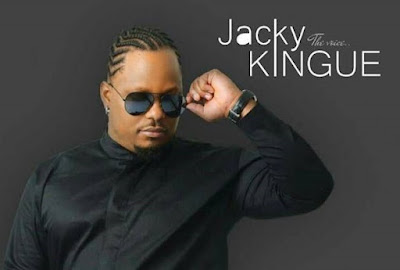 Jacky Kingue, whose real name is Georges Jacky Eyadi Kingue, was born on 27 September 1987 in Yaoundé. He is the son of the late Robert Kingue and Mouto Ntonè Jacqueline Cécile, and grew up in Douala, within his maternal family. After a somewhat chaotic schooling, due to a lack of financial means, he stopped his studies in the fifth grade, when he was fourteen years old. From this difficult period, he kept the emotional memory of his late paternal uncle, Ngando Nicolas, thanks to whom he and his older sister were able to attend school until they obtained their primary school certificate. When he stopped studying, Georges Jacky Eyadi Kingue took on a series of odd jobs, while his mother struggled to support the family. A teenager's life made up of deprivation and resourcefulness. During these years, Jacky forged a warrior's soul, with his passion for music as his only weapon. And to do as the grown-ups do, despite his family's reticence, he tinkers with his own instruments, which he learns to play on his own. Like his friend, Francis Ngombe Matanda, he was passionate about drums and made his own with old milk cans and rubber from used inner tubes. Both dreamed of becoming professional drummers. 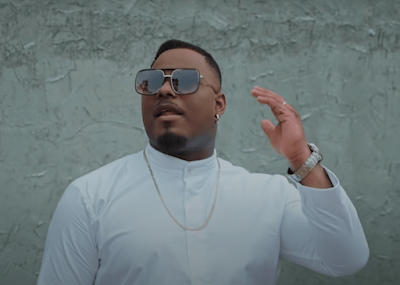 Finally, in 1999, Jacky gave up the drums to devote himself to singing. He then took his first steps as a singer in one of the cabarets in his neighbourhood in Douala. Despite the lack of a fee, he played there every night after his day's work, under the protection of one of the group's managers, the artist Dany Mouandjo. Only tips served as a salary. But his real apprenticeship came a few months later, during a tour of the band in the south-west of the country. He learned to use his voice as an instrument.

Back in Douala after twelve weeks of touring, Jacky decided to leave the group to become a travelling singer. In 2001, at the request of singer Kaïssa Pakito, he joined the cabaret La Belle époque. He stayed there for a few months, before joining the Brasseries du Cameroun Orchestra. But in parallel to his musical activities, he decided to open a hairdressing salon in order to ensure a fixed income. He had learnt this trade a few years earlier from a friend.

One evening in 2001, his singing talents were noticed by Prince Ndédi Eyango, one of the stars of Cameroonian music. The latter decided to produce his first solo album entitled Patou. The album was a success and Jacky Kingue became known to the general public. He received many awards, including the male revelation of the year 2002. Buoyed by this success, he left Cameroon that year to settle in France.In 2004, he released his second album Un pas de plus / One more step and parted company with his producer by mutual agreement. At the time, he wanted to broaden his horizons and fly on his own. But above all, he wanted to go back to school. He learnt about computers, in order to be able to make computer-assisted music. Anxious to improve his musical knowledge, he also attended the conservatory. Through hard work, he became not only a songwriter, but also an arranger.
♫ Video Clip: 2004 – Jacky Kingue – Maléa Ma Nyagwam (Les conseils) 6:14
♫ Video Clip: 2018 – Jacky Kingue – Ndjika Ndolo Ni 3:42
Over the years, he created a small production label (Kiharold Production), wrote songs and produced albums for other artists. In 2010, he released a maxi-single entitled En charge, which unfortunately did not meet with the expected success. Six years later, another maxi-single Open became a great success. In 2020, he scored withe a revived Chérie Coco, a song written a few years earlier. As soon as the single was released in March 2020, it was a huge success. After the aforementioned (maxi) singles, Jacky Kingue presented his new (third) album containing fourteen completely new songs on 14 November 2021 from Hotel St. Christopher's in Paris.
♫ Video Clip: 2021 – Jacky Kingue – Jenny 4:23 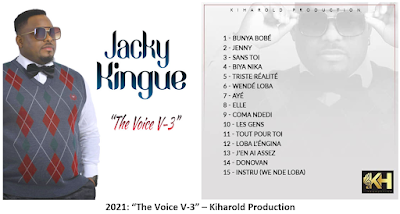 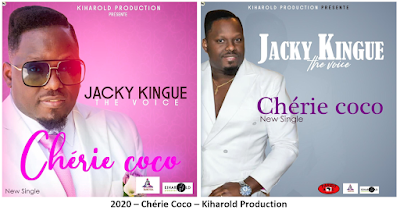 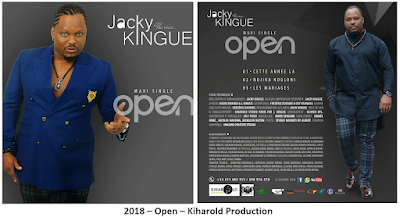 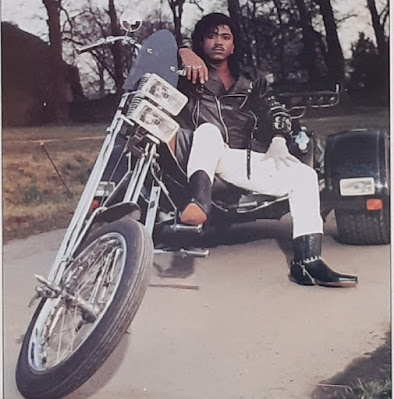 In the second half of the 1980s, Papy Ndoumbe's musical career got off to a flying start with two successful albums, Lézard trompeur in 1987 and A saute mouton in 1989.  After that, it became quiet around this promising singer/guitarist. I read somewhere that he was disabled as a result of a serious accident. That may explain the shortness of his musical career. In 1997, another CD of his is released with the title Cathy remix, on which a number of songs from his two previous albums can be heard in a new remix. However, this album does not contain any new songs. It seems that Papy Ndoumbe now lives in Germany. 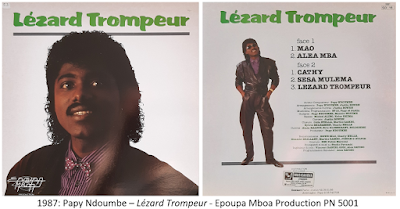 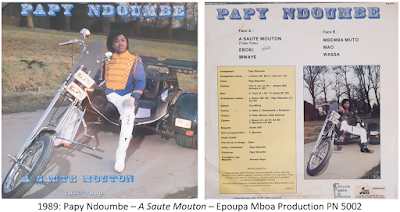 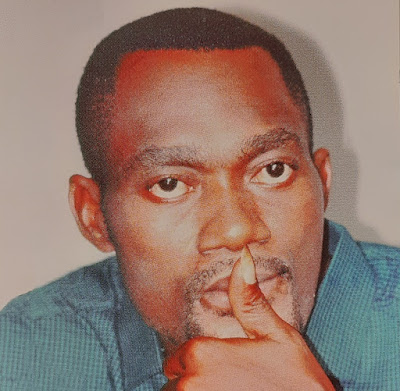 Pablo Ekambi started his musical career as a drummer-percussionist of the singer/composer Ngalle Jojo. It was also Ngalle Jojo who was responsible for the production in 1983 of Pablo’s first LP entitled Na wedi mbembe. Pablo’s second album was the CD Bon Payeur, released in 1996 by Aladji Toure. Unfortunately Pablo Ekambi passed away in 2007. 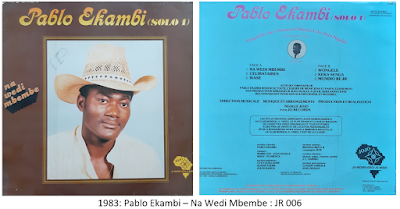 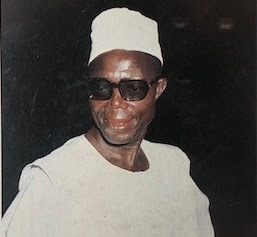 Nelle Eyoum Emmanuel is one of the pioneers of modern Cameroonian music. He is considered the creator of Makossa alongside Ebanda Manfred and Epee Mbende Richard.  Born on 5 October 1934 in Douala (Bonatene - Deido), Nelle Eyoum started playing music in 1950. Self-taught on the guitar, he played and spread the songs of the Assiko repertoire of his region. He also has a real passion for the music of Zaire. He is particularly fond of the music of Wendo Kolosoy, one of the stars of Zairoise music at that time. Between 1950 and 1952, Nelle Eyoum met his idol Wendo Kolosoy and joined the latter's band. He explored the former Belgian Congo and played guitar with his idol.

In 1953 Nelle Eyoum recorded his first songs in Leopoldville (now Kinshasa) in one of the biggest and most famous recording studios in the region (a 78 rpm record for the famous Ngoma label in Leopoldville. That same year, for family reasons, Nelle Eyoum returned to Cameroon to his native Douala. He made his first recordings on Radio Douala in 1958 with Mouelle Guillaume. The following year, he joined Ebanda Manfred in the Rythmic Band and together they made a series of recordings for Radio Douala between 1953 and 1963, including the song Kembe federal. The most famous recording was Diabala Basile (Basile's Wedding), recorded in 1959 and widely regarded as the first Makossa recording.  Indeed, it is this title which is at the origin of the word 'Makossa'. The word 'Kossa!', which was used to call for dancing, became the central element of this song and ended up designating a musical rhythm and by extension a dance. 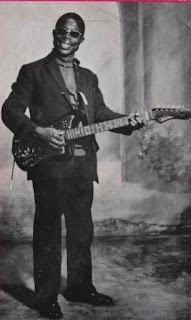 Nelle Eyoum founded and was a member of several groups, the most important of which were Los Calvinos and Le Negro Styl. He was also a member of the famous group Uvocot Jazz in the 1950s, which included: Epee Mbende Richard, known as Epee d'or, Moundo Mongele Isaac, Ebanda Manfred, Priso Makembe, Mangamba Emmanuel, Esaaka. Nelle Eyoum took over the leadership of Los Calvinos after the death of Calvin Nseke, the group's founder. He left Los Calvinos to form Negro Styl with Helle Gauthi, Moukoko, Tintin, Eke among others. Every weekend in the mid-1960s, fans and music lovers flocked to the Flambeau bar where, with the group Los Calvinos, Nelle Eyoum kept the music lovers dancing until the end of the night.
♫ Audio: Nelle Eyoum Emmanuel & Los Calvinos – Na kwedi dimune: 3:50
♫ Audio: Nelle Eyoum Emmanuel & l’Orchestre Negro Styl – Nyue ye bobe: 3:25
In addition to her numerous recordings on Radio Douala, Nelle Eyoum has produced several singles and two LPs. In 1973 he participated in the first national music festival of Cameroon. He has been a mentor to many artists and has inspired many Cameroonian artists with his style, including Jojo Ngalle, Ele Gustave Nkotti, Francois Misse Ngoh, Toto Guillaume and Nkotti Francois. In 1981 he released the LP Ikwale on the ERI label from drummer/producer Ebeny Donald Wesley.
♫ Audio: Tonton Nelle Eyoum – Ikwale: 6:00
Nelle Eyoum died in 1994 as a result of injuries sustained in a fatal traffic accident. Shortly after his unexpected death, Aladji Toure released a tribute album entitled l'Age-d'Or: Hommage a Nelle Eyoum. For this album, Toure brought together a selection of Cameroonian artists, including Kotto Bass, Ben Decca, Nkotti Francois and Henry Njoh.
♫ Audio: Ben Decca, Nkotti Francois, Henri Njoh, Kotto Bass – Festival (a/c/ Nelle Euoym): 4:57 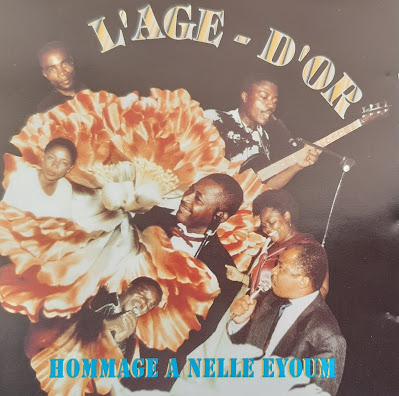 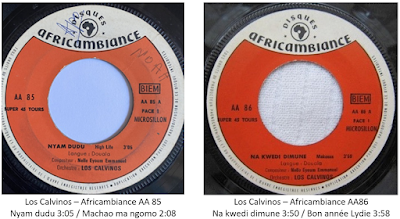 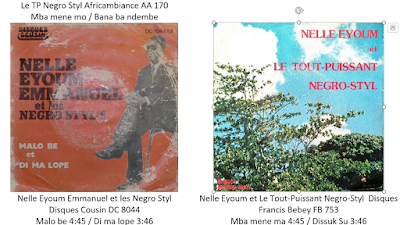 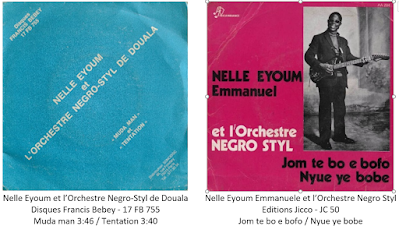 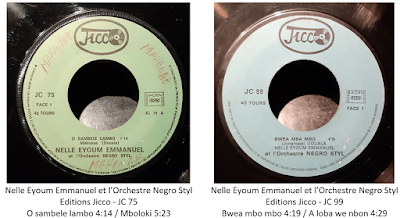 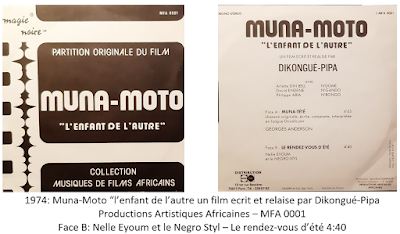 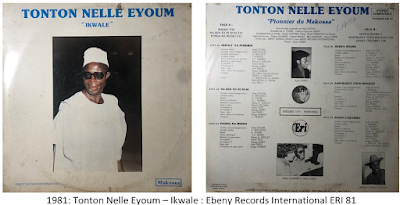 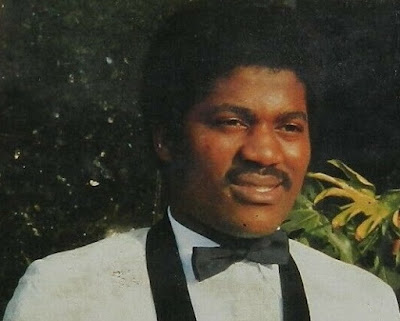 In 1982, Aladji Toure released the debut album of Ebeny Ngosso. The album, which includes the songs Miango and Sango Pato, can be counted as one of the makossa classics of the early 1980s. Ebeny Ngosso did not succeed in repeating the success of this debut album. It was followed by another album in 1985 entitled Muna-Muto and after a long period of silence, he released the CD Moussango in the late 90s. Unfortunately, I have not been able to find any additional information about the further course of his musical career. 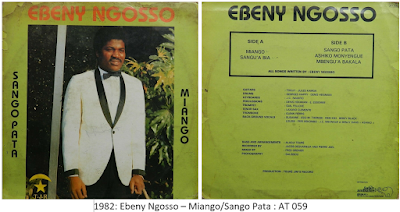 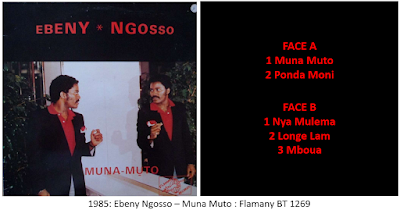 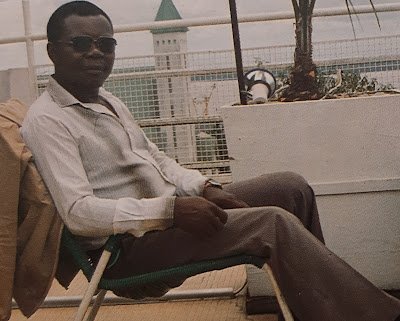 Danger Ngando Konnè had some success as a singer between 1975 and 1985. In the second half of the 70s, he released several 45 rpm singles, one of which with the legendary Black Styls. In the early 80s, two of his LPs were also released. After 1985, little more was heard from him. 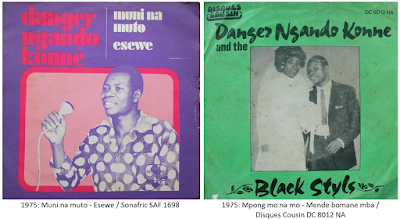 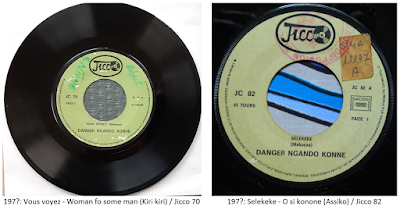 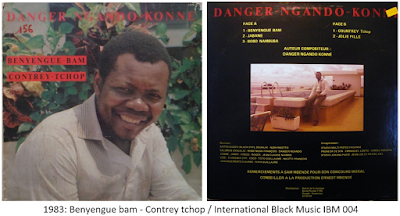 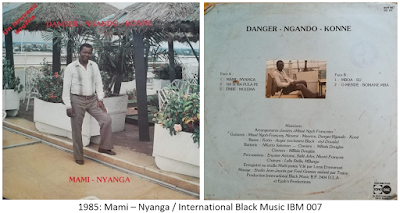 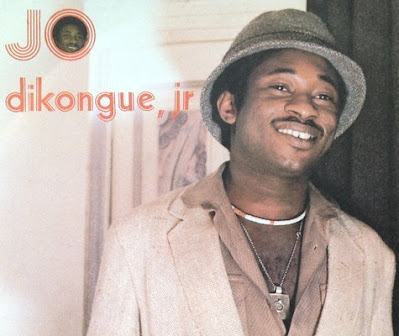 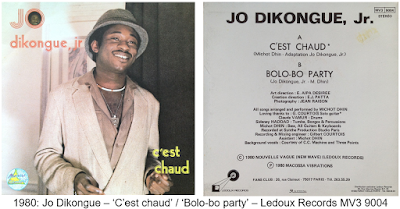 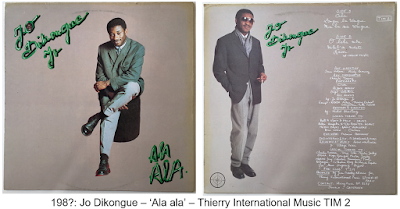