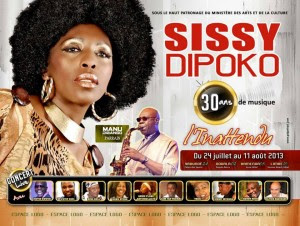 Sissy Dipoko was born in Douala, the cultural cradle of Cameroon. She spent a large part of her childhood and adolescence in Yaoundé. She was attracted to dance, but even more so to sport, and took up basketball and athletics. However, very quickly, this gazelle with a feline look caught many eyes. Thus, at the end of the 70s, she illuminated the catwalks of Cameroonian fashion shows with her presence...
After arriving in Paris in 1980, Sissy Dipoko continued her modelling career for some time. Indeed, thanks to her cousin Vicky EDIMO, a talented bass player, she met Paco Rabane, for whom she worked for over a year...
At the same time, with Makossa in full swing, the Cameroonian musician Bill Loko was looking for backing singers. He thought of Sissy Dipoko. She hesitated, not feeling like a singer for a penny. Nothing predisposed her to singing and yet ... fate decided otherwise ... It is undoubtedly her collaboration with Bill Loko, leading to the hit single Nen Lambo, which led Sissy Dipoko into the world of song.
The great Manu Dibango soon noticed her and integrated her into his team as a backing singer. She then became more and more in demand and collaborated with the most famous artists of African music such as Myriam Makeba, Pierre Akendengue, Ray Lema, Guy Lobé, Aladji Touré, Toto Guillaume, Tala André Marie, Moni Bilé and Dina Bell, to name but a few! Alongside Manu Dibango, Sissy Dipoko has performed at all the festivals (Jazz à Vienne, Les franco folies de la Rochelle). After the success of the concerts at the Olympia in Paris and the "Africa Fête" in Pantin in 1981, she testifies with emotion to the influence of multicultural France on the stage of "la 25ème heure" at the Zenith in Paris in 1986. On these occasions she rubbed shoulders with Miles Davis, Herbie Hancock, Claude Nougaro, Laurent Voulzy, Pierre Vassiliu, Dave Brubeck, Paul Simon and many others.
Encouraged by the arranger-producer Justin Bowen, Sissy Dipoko took off in the early 90s, releasing a 5-track album entitled Mun'am (My child, in Duala language). From Bikutsi hit to Merengue ma mboa, the album was a huge success all over Cameroon.
♫ Video Clip: 2011 Sissy Dipoko – Munam 4:52
At the end of the 90s, Sissy decided to put her life as an artist on hold to devote herself exclusively to the education of her children. During this period and until 2004, she put her experience as an artist in the diaspora at the service of the "Collectif pour les droits d'auteurs et contre la piraterie". She was one of the resource persons for the creation of the "Cameroon Music Corporation". At the same time, she calmly reflects on her musical contribution to the fight against the scourges that decimate African youth.
In 2012, after many years, she released her 2nd solo album entitled "L'inattendu" (The Unexpected).Guest artists on this varied album include Penda Dalle, Dina Bell, Henry Njoh, Joëlle Esso and Koko Ateba.  Justin Bowen was also responsible for the arrangements and production on this album.
♫ Video Clip: 2011 Sissy Dipoko ft. Penda Dalle – Dutea 4:36
In recent years, Sissy Dipoko has, together with others under the banner of the Mulato Entertainment Foundation, dedicated herself to developing, guiding and promoting young female musical talent.
DISCOGRAPHY 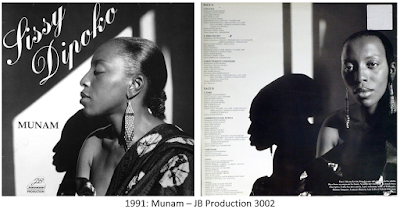